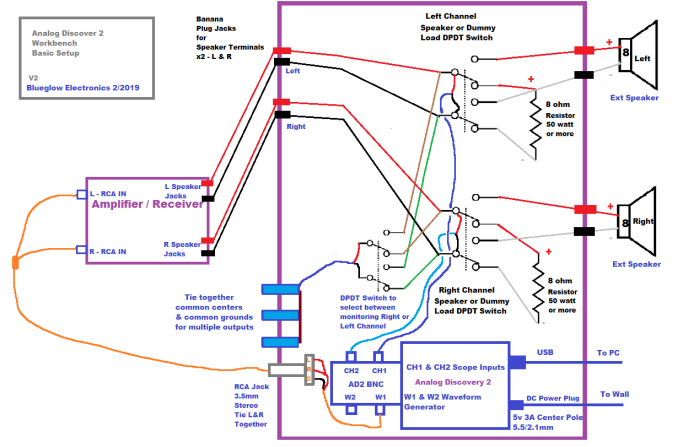 Slides from my video on Bucking Transformers

I am getting ready to build an electronics workbench and would like to design it similar to your bench.  Would you please answer the following questions?
(1) What is the height from the floor to the workbench top?

(2) What is the dimensions (length and depth) of your workbench top?

(3) What is the distance from your workbench top to the 1st shelf that holds your scope?

(4) What is the distance from the 1st shelf to the 2nd shelf?

10″ between shelves (top to top so subtract 1.5″ for shelf thickness)

(5) What is the depth of your two shelves?

It’s three shelves at 16″ each deep.  They are wider than the bench.  The 2×4 basics structure isn’t attached to the workbench at all.  Sits around it basically but is as solid as a rock.  Check out the 2×4 basics website.  So easy to build and cheap as dirt.  Only downside is thickness of shelves but I need that for the weight of my test gear so they don’t sag anyway.
http://www.2x4basics.com/Shelf-Links.html
See pics

Why and How To Reform Electrolytic Capacitors

I made a video on this topic and have uploaded the steps in the following document:

Why and How To Reform Electrolytic Capacitors

See the following schematic for mods to the amp:

Links to the BOM, Power Supply, and Amplifier Schematics 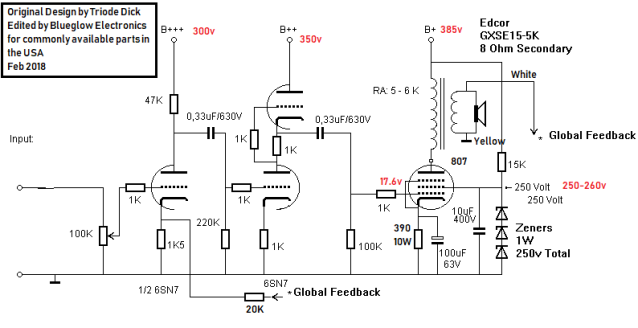 Sorry, I forgot and left the Solen MKP PS Poly Caps in the BOM, I didn’t end up using them and used electrolytics instead due to the size of them.  I fixed this in V2 of the BOM above.

This is an upload of the manual for the Tube Console Amplifier I made a three part series on in Nov 2017. 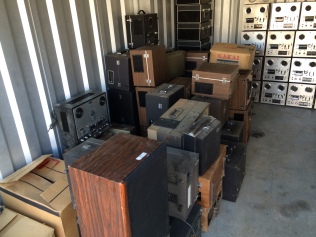 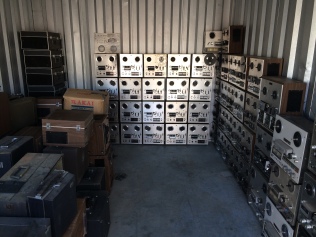 In the summer of 2015, I got a phone call replying to one of my many Craigslist “want to buy” ads that I run regularly.  It was an older gentleman and he asked me if I would be interested in some reel to reel units.  My first response was “always”.  I asked him how many he had.  He said “well, I’m not really sure but I’d guess 100 or more”.   It took me a minute to catch my thoughts and I responded with “sure, where are you located and when can I come look at them”.  We setup a time for the next afternoon at 5:30 as his place was about 30 minutes from my office in the middle of nowhere.

I turned off a main road onto a dirt road that went for about a mile, then turned me down a small dirt driveway that went way off into the woods.  When I pulled up, I thought for sure this was a scam and I was about to leave.  An old gentleman around 70 came out of his single wide trailer and said “are you here about the reel to reel units?”.  From the seat of my car with the window down, I responded “yes”.  He said “you’ll need to follow me around back in your car, we need to go down to a building.”  I’m very nervous at this point but he seemed harmless and it was just an old car and a tractor in the yard.

Sure enough, he had a 40′ x 40′ building out back that was stuffed full of reel to reel units, speakers, stereo units, parts, LPs, pro audio gear, racks, etc.  This just wasn’t all adding up in my head but there it was in front of my eyes.  I asked him how he got all of this.  He said a year back his best friend that he grew up with that had never married had passed away.  Apparently he owned a company that serviced and sold audio gear to churches all up and down the east coast.  When he passed away he had left his house and everything in it (what was in this building) to his best friend, the guy in the single wide.

The old guy told me that he and his wife had sold his friend’s house and were going to use the money from it to live off of their remaining days.  But he said to sell it, he had to get all of the stuff out of it so he borrowed a tractor trailer and moved it all into his tractor barn.  He basically wanted the stuff out of his barn so he could put his tractor back in there.

We struck a deal at $1400 for all of the gear as he basically wanted it gone and I felt he should get something for all this, assuming that I would move everything myself and that there was no guarantees on any of the gear.  I rented a 28′ U-haul truck and it took two trips to get it all across two weekends.

There was just a lot of strange stuff in this building.  A few large boxes contained 43 odd units, Thompson Voice Eliminators of various shapes and models.  I really had no idea what they were originally but I did my homework, cleaned all the pots on them and tested they worked, flipped them all on ebay for nearly $7000 after fees and such.

There were tons of R2R accessories in boxes, most of which I flipped on ebay for another $3000 or so.  An oddly a Sharp Boombox that plays LPs.  Cleaned it up, put a new belt on it and sold it for nearly $1000. 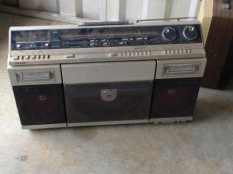 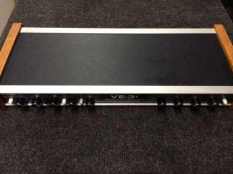 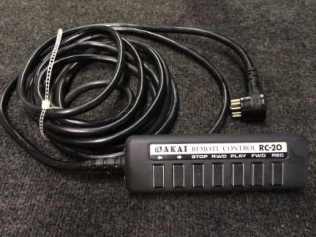 As far as the reel to reel units, there were between 130-140.  We got confused counting twice so gave up…  A lot of medium quality units, many of which were brand new.  And then about 20-25 higher end units.  I kept a few Tandbergs, an Otari, a Pioneer 909 and a few 707’s and a few other Teac units (not for sale).  Dozens and dozens of metal and plastic take up reels, most of those have been either kept or shared with friends.

I had rented two storage units to put these in because I knew I wouldn’t be keeping them and I didn’t want to bring buyers into my building at my house.  I first started posted a few higher end ones on craigslist and sold about $2000 worth that way over a few months.  Then I posted pictures of all the remaining units online and some russian guy contacted me and asked me if I could send him lots of pictures, he was interested in all that I have.  He met me out there a week or two later on a Saturday and we struck a deal at $4000 for everything else that was left.  He handed me the cash, I left him the two keys to the units and told him he had to have them out by month end and to leave the locks and keys inside the units.  It was all gone by the following weekend, never heard another word from him.  Apparently he is just a middleman for someone overseas who buys up stuff, he packs it and puts it in shipping containers and ships it all over once one is full.  Several of my friends in the area said he had contacted them about speakers and what not before when they ran ads for sale so he must scour the east coast pretty well.

In the end, I netted somewhere north of $15k on the whole deal so I drove back down one day and gave the old guy a few more dollars out of fairness.  It was one of the most interesting pics of my life but the excitement of digging through boxes was more than I could handle at some points.  When you opened a box, you didn’t know if there was going to be 100 8 track tapes in it, or $1000 worth of R2R accessories, gosh knows, we found both over and over…

The sad part is that other than about 6 Roberts R2R units, there wasn’t any tube gear in the whole lot…  as we all know that is where my passion lies.  Just a few sample pics of what was in the lot, a lot of really odd and random stuff indeed. 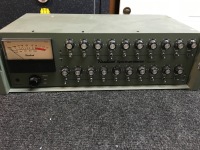 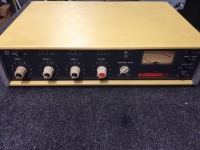 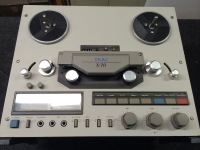 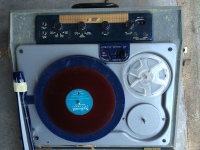 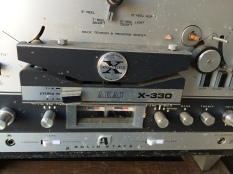 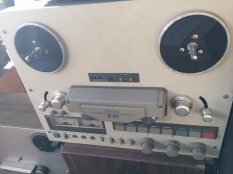 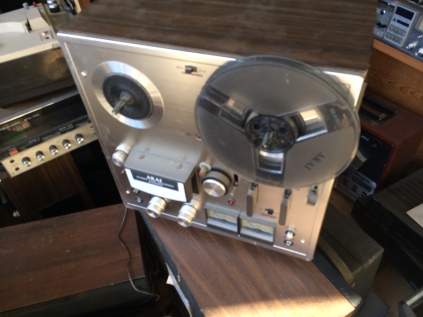 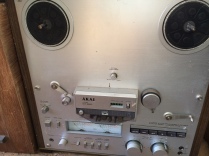 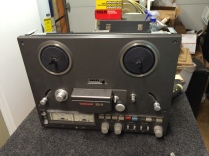 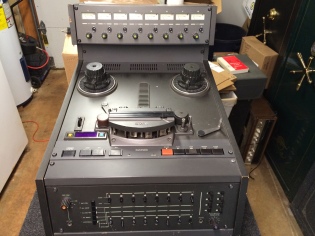 If you want to build a wooden cover for your AR SP3 like mine, please see the attached dimensions and instructions.  Click the following link for the pdf document:

Sketch of my Audio Bench Setup

Sketch of my audio bench setup and the connections to various test equipment.  Please watch my “Audio Test Bench Setup and Dummy Load Build – BG052” YouTube video for a walkthrough.

Glass tubes have visible glow inside them. Most audio types use oxide-coated cathodes, which glow a cheery warm orange color. And thoriated-filament tubes, such as the SV811 and SV572 triodes, show both a white-hot glow from their filaments and (in some amplifiers) a slight orange glow from their plates. All of these are normal effects. Some newcomers to the tube-audio world have also noticed that some of their tubes emit a bluish-colored glow. There are TWO causes for this glow in audio power tubes; one of them is normal and harmless, the other occurs only in a bad audio tube.

1) Most glass power tubes show FLUORESCENCE GLOW. This is a very deep blue color. It can appear wherever the electrons from the cathode can strike a solid object. It is caused by minor impurities, such as cobalt, in the object. The fast-moving electrons strike the impurity molecules, excite them, and produce photons of light of a characteristic color. This is usually observed on the interior of the plate, on the surface of the mica spacers, or on the inside of the glass envelope. THIS GLOW IS HARMLESS. It is normal and does not indicate a tube failure. Enjoy it. Many people feel it improves the appearance of the tube while in operation.

2) Occasionally a tube will develop a small leak. When air gets into the tube, AND when the high plate voltage is applied, the air molecules can ionize. The glow of ionized air is quite different from the fluorescence glow above–ionized air is a strong purple color, almost pink. This color usually appears INSIDE the plate of the tube (though not always). It does not cling to surfaces, like fluorescence, but appears in the spaces BETWEEN elements. A tube showing this glow should be replaced right away, since the gas can cause the plate current to run away and (possibly) damage the amplifier.
PLEASE NOTE: some older hi-fi and guitar amplifiers, and a very few modern amplifiers, use special tubes that DEPEND on ionized gas for their normal operation.

-Some amps use mercury vapor rectifiers, such as types 83, 816, 866 or 872. These tubes glow a strong blue-purple color in normal use. They turn AC power into DC to run the other tubes.
-And occasionally, vintage and modern amplifiers use gas-discharge regulator tubes, such as types 0A2, 0B2, 0C2, 0A3, 0B3, 0C3 or 0D3.
These tubes rely on ionized gas to control a voltage tightly, and normally glow either blue-purple or pink when in normal operation. If you are unsure if these special tubes are used in your amplifier, consult with an experienced technican before replacing them.